For over 70 years the Echo Tap has refreshed travelers and locals alike with cool drinks and good food. At a place of convergence of upscale condominiums, student apartments, downtown offices, and bus travelers, the tavern caters to no single group, but instead provides a friendly gathering place for all who live in the neighborhood or have cause to visit.

The Echo Tap is located downtown Madison at the corner of Bedford and Main Street, just 5 blocks southwest of the State Capitol, and an easy walk from the Kohl Center and the UW Madison campus.

The interior is paneled with more than a mile of box car timber, a reminder of the neighborhood’s ties to the west rail corridor. Last summer we added a new patio with a good mixture of sun and shade — take your pick!

Known for the best soups in Madison, the Echo serves a tempting menu that features a daily food special, also the Echo Burger, the reliable Friday fish fry, and some of the best pizza in Madison with a choice of pizza crust: hand tossed or New York thin crust. We recently added some delicious salads.  And all our food is available for delivery every evening late nite!

The Echo has one of the largest selections of tap beers in the city (20) and of course a full spirits bar to fix your favorite cocktail. For sports fans, the Echo has 22 large HD TVs — and more importantly, 16 tuners — so you will see every minute of the game that YOU want to see!

Weary travelers have long welcomed the sight of the Echo Tap at the corner of Bedford and Main.  Many a train traveler crossed West Washington Avenue from the Milwaukee Road Station to feed their hunger and refresh themselves with a drink. The tavern’s name Echo Tap derives from the sounds of the passing trains reverberating in the Fourth Ward neighborhood.

The Echo Tap has been open for over 70 years, same location, same family, beginning with John and Theresa Hausladen, who bought the business in 1941 when it was called Maly’s Tavern.  When John died, Theresa and her twin daughters, Genevieve and Elizabeth, ran the business until a Milwaukee Road worker named Mike Rynes took a liking to the bar and to Gen, and he married one and then bought the other in 1957.

Mike and Jen had seven children, including son Pat, third generation and current proprietor of the Echo Tap.

Inside the Echo, the walls and ceilings are paneled in more than a mile of box car timber, and the floor is covered with hard fired clay quarry tile, all this the result of a revovation that Pat made in  the 90s to fulfill his father’s dream.  Today, Pat greets friends and neighbors with the smile of someone who is living a dream come true.

Across the street from the Echo, the Badger Bus station brings today’s traveler within sight of Madison’s premier neighborhood tavern, the Echo Tap. 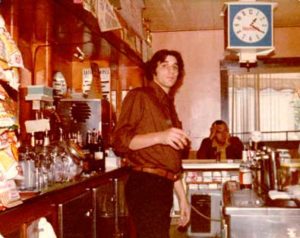 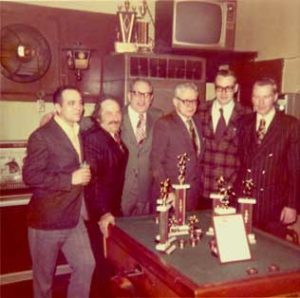 The Echo Tap Keglers win it all, season of 1973 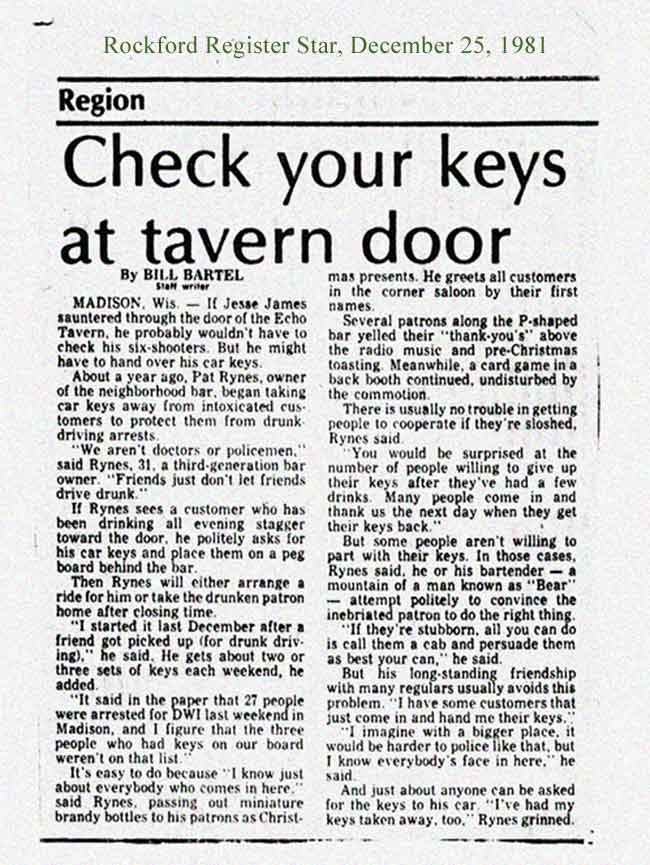